E1M1: Abandoned Warehouse is the first map in episode The Dark Tower of Masters of Chaos. It was designed by Caleb26 and uses the same music track as Heretic's E1M1: The Docks. 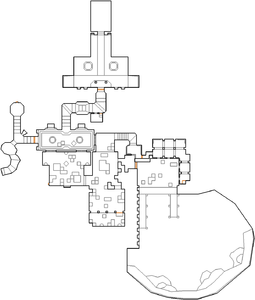 Map of Abandoned Warehouse
Letters in italics refer to marked spots on the map. Sector, thing, and linedef numbers in boldface are secrets which count toward the end-of-level tally.

From the docks, head south to a waterfall surrounded by a rock formation. There are two crystal vials and four Wand Crystals here, which will be useful as this level relies heavily on the Elven Wand.

* The vertex count without the effect of node building is 1148.