E1M1: Canal is the first map in episode The Coast of Praevus of HUMP mini. It was designed by PerfectionismTech and uses the music track "Ded" by Kevin Schilder. 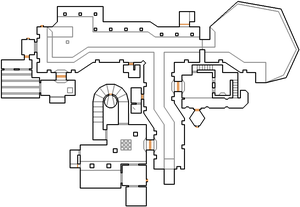 Map of Canal
Letters in italics refer to marked spots on the map. Sector, thing, and linedef numbers in boldface are secrets which count toward the end-of-level tally.

Walk forward and turn left to enter a room with gargoyles then go through the east door to reach the canal, where more gargoyles are waiting along with one or two undead warriors to the north. Follow the canal north and west to a wooden pillar with the yellow key on top of it, then open the gray door to the south and go into a storage room with more of the same enemies. Go between the barrels to the small door in the north-east corner to find an undead warrior guarding a switch, press it to lower the pillar holding the key then go back outside to collect it.

Head east along the canal until you see a door to your right between two yellow gizmos; this door has two golems behind it on bringest them oneth skill level or higher, and there will be an undead warrior on an overhead ledge to your right. Head through the north doorway and go up some steps to a chamber with more golems and gargoyles, then go up some more steps and turn right to follow a ledge to the exit door. Open the door, kill a golem waiting behind it on thou art a smite-meister or higher then press the blue switch to finish the level.

In the starting area, go through the doorway in the north-west corner and pass one or two golems to reach a curved staircase leading to an Ethereal Crossbow.

Opposite the yellow key door is a small door with a gargoyle, Ethereal Arrows and a Bag of Holding.