E1M1: Communications Bridge is the first map of Knee-Deep in the Dead in Doom the Way id Did. It was designed by Sarah Mancuso (esselfortium) in the style of John Romero. The par time defined in the DEHACKED lump is 30 seconds. 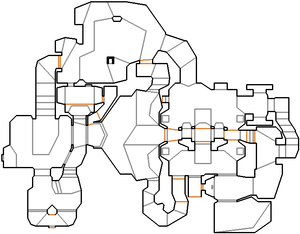 Map of Communications Bridge
Letters in italics refer to marked spots on the map. Sector, thing, and linedef numbers in boldface are secrets which count toward the end-of-level tally.

You are able to run straight to the exit from the start. To do so, head left and around the pool of nukage and into the next hallway. From here, head eastward and go up the stairs turning left at the next fork. The exit door should be straight ahead.

* The vertex count without the effect of node building is 552.