E1M1: Gaspra Armory is the first map of Fava Beans. It was designed by Sean Birkel. Unlike the other maps, it only uses resources from the shareware version of Doom. That means it can be successfully played using that version (as long as not playing any multiplayer session in the shareware, as the game can crash due to an invulnerability sphere which is not found in the first episode). 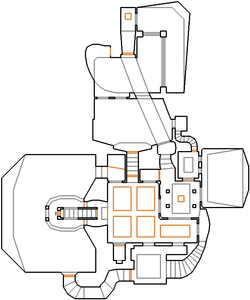 Map of Gaspra Armory
Letters in italics refer to marked spots on the map. Sector, thing, and linedef numbers in boldface are secrets which count toward the end-of-level tally.

This level contains all three keys, two of which are not required to collect. The yellow key is only required on this level.

First off all, leave the room within you begin the level and enter the room with five ceiling windows. The lift will lead to the exit room, however, this is locked for now. The door ahead conceals another door which requires a yellow key. Head right and enter one of the arches to enter a computer room which is full of monsters. A shotgun guy is among them. Instead of killing him and obtaining his shotgun, immediately turn left and take a separate shotgun lying in the corner (in many cases you could fail to notice it or notice only after you kill the shotgunner and other ones in this room). Eliminate everyone here and walk up the stairs that will lead you to the upper room. In this room, notice a silver metallic pillar with the yellow key placed upon. Lower it by pressing use on. Take the keycard.

Backtrack to the first room you visited (with five windows at the top) and head through the door in the north. Behind this door, as was mentioned before, is the yellow door which you can open now. You are now in the nukage room. Turn left and wear a radiation suit. Cross the nukage pool to the other side. On this side you can see a blue door ahead (optional to visit; if you have a blue key), a red keycard to your right (optional) and a small nukage closet. Visit this closet and press the green button hidden here.

The green switch you have just pressed has unlocked the exit room, so backtrack to the room of five windows and take the lift also mentioned above. Take any hallway around until you meet the exit door (you also can glimpse a secret outside area here). Open this door and descend down to a lever that you should turn in order to end.