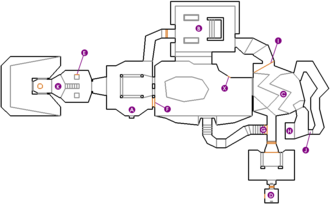 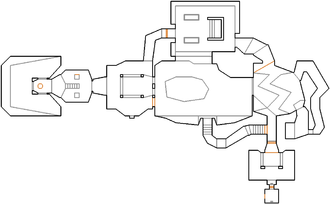 The way the sky is set up in the outside area (sector 47) makes the zig-zag room building seem smaller from the outside than it is on the inside (sector 56 and others).

In the Doom Bible, the original design document for Doom written by Tom Hall in 1992, the first level of the game was supposed to be a spaceship hangar called "Hangar 2". It is described as fallen into disuse, and now serving as storage for used-up equipment and junk. In one of the rooms the soldiers play cards in their free time. This hangar was supposed to be carved into the wall of a canyon. Despite the name, E1M1 bears no similarity to that early level concept. The Doom v0.3 alpha version did feature an initial level based on this "Hangar 2" sketch, but it was later redesigned to become E2M7:Spawning Vats in the released game.

Although E1M1 is the first level of the game, Romero has stated that it was the last level that he created. This reflects part of his personal philosophy of level development: since it takes time to become proficient making levels for a new game engine, making the first level last ensures that new players will be greeted with a good quality level. Romero has also described E1M1 as a "classic horseshoe" design [19].