E1M1: Landing Zone is the first map of Chex Quest. It was designed by Digital Café and uses the music track "". The par time is 2:00. 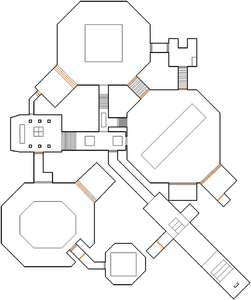 Map of Landing Zone
Letters in italics refer to marked spots on the map. Sector, thing, and linedef numbers in boldface are secrets which count toward the end-of-level tally.

Make a 180 degree turn and open the door to your left. Take the blue key and head to the blue office behind the silver door. Get into the small tunnel near the desk, open the door, go behind it and then open another door but within a hangar. Open the far blue door on the other side and another one behind it, get in the next room and take the red key in the corner with the slime stain. Open the other blue door and another one behind it, go to the right stairs on your right, turn left to open the red door and push the exit switch far in the Christian-cross-shaped corridor.

In the final room on the right side there's a secret door with a picture of a cereal general with slime covering his face. The inside contains chex armor.

A small sliver of a wall just to the right in the starting room is marked as an exit, making it so the map can be completed in as little as one second.[1] This was removed in the Chex Quest 3 version of the map.

* The vertex count without the effect of node building is 437.