E1M1: Phobos Terminal (No Sleep for the Dead)

E1M1: Phobos Terminal is the first map of No Sleep for the Dead. It was designed by Jan Van der Veken and uses a MIDI rendition of "Last" by Nine Inch Nails as a music track. 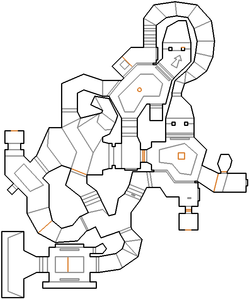 Map of Phobos Terminal
Letters in italics refer to marked spots on the map. Sector, thing, and linedef numbers in boldface are secrets which count toward the end-of-level tally.

At the start of the level, take a single armor bonus and go into the first hall. In the first hall, collect a green armor and fight an imp or three imps (skill-sensetive). Other enemies may attack you above in the window (which is the final room). Again, depending on the skill level, they might be two former humans, three former humans or three former sergeants. If you need, take the stimpacks hidden behind both fences not dropping into the nukage pool.

Now, head into the brown door. Dispose of enemies on your way collecting three health bonuses (overlooking a catwalk), two ammo clips and heading into the next room with an inaccessible soulsphere. Take the shotgun here (the distance of the shotgun depends on the selected skill level; so it is farthermost on the UV and Nightmare!). Eliminate the enemies with the help of the barrels. Once finished, see how to find secret#2 if you want it and head into the green STAR tunnel.

After the tunnel, cross the catwalk to the south side. When you leave that area, the ledge with the imps on it will lower revealing a closet. You may return to find something interesting. Go upstairs and head to the left (to the right is an optional room where you can also find secret#3). Go up the other stairs, then into the window room, which overlooks the starting room. Open the exit door and end the level.

The nukage room with a catwalk was undoubtedly inspired of the zig-zag room from E1M1, both featuring the ledge with imps on it which later lowers revealing a room behind.

When you leave the western room with secret#3 another room to the south will open. You can find a berserk pack in this room.

* The vertex count without the effect of node building is 484.