E1M1: Sidhatraz is the first map in episode The Ruins of Parthala of Heretic Upstart Mapping Project. It was designed by Skeletonpatch and uses the music track "Elf" by Kevin Schilder. 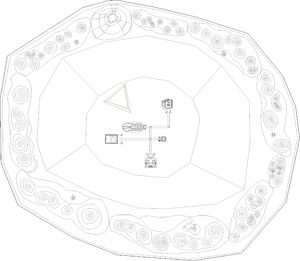 Map of Sidhatraz
Letters in italics refer to marked spots on the map. Sector, thing, and linedef numbers in boldface are secrets which count toward the end-of-level tally.

Look through the bars in front of you and shoot the golem behind them, then shoot the switch to your left to open all the cells and release one or two gargoyles. Head into the western-most cell and walk through the red and blue banner (it is a false wall) to find a tunnel containing an Ethereal Crossbow and arrows as well as one or two golems (or one nitrogolem on thou art a smite-meister (TAASM) skill level or higher). Drop out of the end of the tunnel to land in a large lake then head for the southern building (made of gray bricks), watching out for gargoyles firing at you from overhead. Climb the stairs in front of the south building and go inside it to find a chapel guarded by a disciple of D'Sparil, then look behind the altar at the back of the chapel to find another switch; it will raise some long bridges outside connecting most of the buildings in the level.

Head outside and kill the golems heading your way, follow the bridge to a crossroads then turn left (west) and head towards a green building with an intricate door. Open the door and step into the metal alcove behind it to be taken up to an enclosed area with a Dragon Claw, then press the switch in front of you to lower the wall ahead and reveal a disciple, golems and gargoyles protecting two more switches. Press the left-hand switch followed by the right-hand switch, step on the lift that lowers behind you to get back outside then follow the bridges east and north until you reach the blue building in the north-east corner of the level. Open the gray door and kill any waiting golems and gargoyles, then press the blue switch on the other side of the water pool - the water will drain and reveal the yellow key.

Take the yellow key and go back outside, where you will see that the lake has changed to lava. Go back to the southern building and enter it, kill the waiting disciple and other enemies then look at the west wall to see a yellow key gizmo next to a black support that you can now open to find a switch; the switch will raise some steps behind the altar leading up to the blue key. Take the key then go back outside and follow the bridge to the crossroads; this time, turn right (east) and head towards a teleporter surrounded by bars. Open the exit door next to this structure to reveal a switch that will lower two of the bars, then walk past them and step on the teleporter to finish the level.

The altar in the south building holds a Tome of Power on yellowbellies-r-us (YRU) or lower, along with a Mystic Urn on bringest them oneth (BTO) or lower (replaced with a Quartz Flask on TAASM or higher).

* The vertex count without the effect of node building is 5497.