E1M1: Switch Bored? is the first level of Infinity. It was designed by Bjorn Hermans and Holger Nathrath, and includes a custom music track. 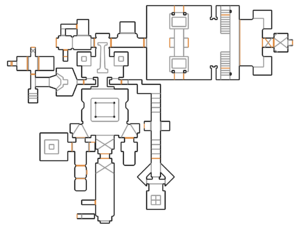 Map of Switch Bored?
Letters in italics refer to marked spots on the map. Sector, thing, and linedef numbers in boldface are secrets which count toward the end-of-level tally.

Since two out of the twelve secret sectors cannot be reached normally without cheating, the maximum number of secrets possible on this map is 83%.