E1M1: The Breach (Return to Hadron)

E1M1: The Breach is the first map of the first episode in Return to Hadron. It was designed by Matt Powell (cannonball) and uses the music track "Suck this" from Rise of the Triad. 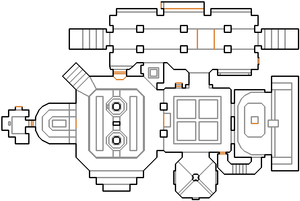 Map of The Breach
Letters in italics refer to marked spots on the map. Sector numbers in boldface are secrets which count toward the end-of-level tally.

The path towards the exit on this level is simple and almost straightforward. You need the yellow key to access the nukage room which has the exit door. Take the bonuses in the room where you start the level and enter the consequent room to the north. Collect the shotgun and use it to dispose of enemies. In addition you can shoot enemies in the nukage room to the west but getting there is impossible without the yellow key. Enter the northern room which contains the yellow keycard. Do not fall here to the nukage, as there is no way to get out of there before you rise the bridge. To rise it turn right and press the switch. If you fall down in this case you can get out by lowering the bridge. Using the raised bridge collect the key on the northern side.

Go back to the southern side in this room, turn right and take the yellow door to get into the aforementioned nukage room. Or if you want you can go back to the first room (where the shotgun was) and open the other yellow door. It holds the switch behind. Once you use this switch the lift will be usable and you can get to the nukage room. Once you enter some bad guys will rise from the nukage. You can exploit the barrels there. Notice the switch on the wall in the left part of the level. Pressing it will give you access to the exit.