E1M1: The Docks is the first level in the City of the Damned episode of Heretic. It shares its music track with E4M6: Halls of the Apostate and E3M1: The Storehouse. 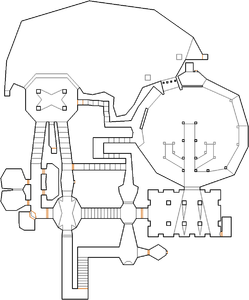 At the start of the map, go straight ahead to the docks. Turn right and follow the stairs on the edge of the area to the yellow key room. Press the switch to lower the key and collect it. Return to the starting area and turn right. Pass through the yellow door and go straight ahead. Go through the wooden door at the bottom of the stairs and turn right again. The rooms on either side of this hall contain some extra Wand Crystals and Crystal Vials that you may want to collect. Go to the end of the hall to a room with a window. To the right is a stairway up. Head up this stairway and press the switch on the wall to open the sealed door that you passed earlier. Drop down and go through the door. Down the hall and to the left, you will find a depression. Step into it and the stairs will rise. Go up the stairs, turn right, and head to the exit.