E1M1: The Traveler is the first map of The Shattered City episode in Strange Aeons, designed by Impie in 2015 and constructed in Doom Builder 2. It uses a music track from Chasm: The Rift. 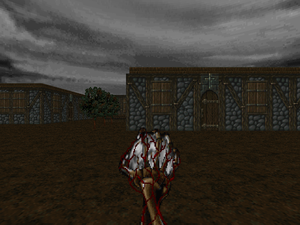 The Traveler's first view of The Shattered City. 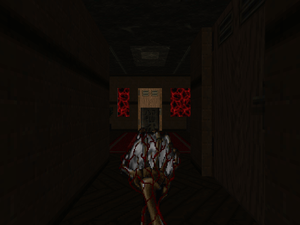 The introduction of each episode, inside the Traveler's house.

This is the smallest map in the game, with barely a handful of monsters to face. Approach the Kadath Tablet until it vanishes into the floor and opens the portal to the Shattered City realm. Jump into the realm and enter the furthest house to get green armor and an AK-47 -- this will cause a pair of gunmen to appear on the nearby rooftops. The slipgate will take you to the small island in the distance, where the exit slipgate awaits with a meager Devil ambush.

If you fall into the aether, do not worry: you will only be teleported back to your entry point, albeit slightly disoriented. This is the case in every Shattered City map, though in some cases you may be teleported to less desirable areas.

There are no secrets on this map.

Most of the maps in Strange Aeons were adapted from Impie's early horror shooters made in Game Maker, specifically Shudder, Jayla's Labyrinth, Jayla's Exodus, and Restraint. This map is no exception. The early games essentially served as level sketches for a later Doom project.

The Kadath Tablets transition sequence was an element Impie had featured in his original plans for a Doom clone way back in 1995, as was the plot about a hero seeking a lost relative.