E1M1: UAC Base is the first map in the first episode of Doom: Damnation. It was designed by Ofisil and uses the music track "In Flames". The par time defined in the DEHACKED lump is 50 seconds. 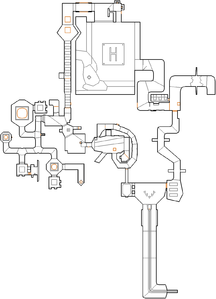 Map of UAC Base
Letters in italics refer to marked spots on the map. Sector, thing, and linedef numbers in boldface are secrets which count toward the end-of-level tally.

Go back to where you found the health bonuses and continue north through a blue key door, then walk up the steps to a hallway with rectangular lights - as you walk over the first light, watch out for a closet with imps opening on your left. Step on the blue teleporter at the end of the hallway, kill the demons in front of you on Hurt Me Plenty (HMP) skill level or higher, then go round the corner and push past some more demons and imps to a switch that will lower the floor beneath you. Once you reach ground level, head south until you reach the helipad then east through an open gate which leads to a brick passage. Follow the passage until you reach a UAC door (which does not open) then continue east past some shotgun guys until you see a demon rise from beneath the floor. Open the silver door on your right and follow the path south past more zombiemen to a room with a shotgun, then go through the door next to the exit sign. There is a small shuttle in the final room - flip the switch to open the shuttle door then press the computer terminal inside the shuttle to finish the level.

Finding secret #2 or #3 will allow you to finish the level without collecting the blue key. A skull switch placed behind the blue key door allows it to be opened without that key.