E1M1: UAC Spaceport is the first map of Massacre on Callisto, which is the first episode of The Lost Episodes of Doom. It was designed by Christen David Klie and previously released as a map in CHRIS_E1.WAD and later in CHRISK.WAD. According to the designer's notes in the book, it was released as CHRISK11.WAD in the first place. 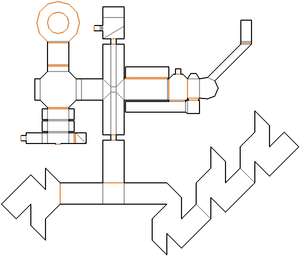 Map of UAC Spaceport
Letters in italics refer to marked spots on the map. Sector numbers in boldface are secrets which count toward the end-of-level tally.

There are all three Keys in the map, however, you need just two of them, the blue and the red. While the yellow and the red keys are the standard keycards, the blue is the skullkey. The fastest way through this level is to use the switch right behind you, and then go straight forward from the startpoint to the door opened by the switch. Drop to the pit before you, and grab the Shotgun. The floor of this pit is rising, and you are nearly surrounded by enemies, so keep in movement while rise. When the platform reached stops, grab the Blue armor, go to the open area, and take care not to fall into the wastepit. Turn to the right, grab the Light amplification visor and take the lift down. Then turn to the left. At the end of this area you find the Blue skull key. After picking it up, go back to the open area with the toxic wastepit. At the middle of the platform turn to the right. In the first room, where you fall down, lies a backpack. Move forward to the lift which take you up, from there go straight to the end and take the way half left, go through the blue door and grab the Red keycard. Run back and take the teleporter which leads you back to the starting point. Go back to the open area and head left this time and take the lift down at the end. In this room you will find the red door, open it and use the switch behind to exit the level.

Short after the start at the opposite platform of the pit you find a Blue armor.

* The vertex count without the effect of node building is 215.