E1M1: Vestibule (M_CPTT01.wad) is the first map in episode The Remains of UAC of ZPack. It was designed by Captain Toenail and uses the music track "Stealth Frag" by Sonic Mayhem, from Quake II. The par time defined in MAPINFO is 5:00. 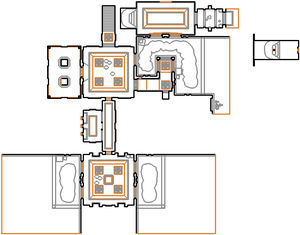 Map of Vestibule
Letters in italics refer to marked spots on the map. Sector, thing, and linedef numbers in boldface are secrets which count toward the end-of-level tally.

* The vertex count without the effect of node building is 1960.

The layout of this map is reminiscent of MAP01: System Control of TNT: Evilution, and indeed the map is meant to be an enhanced remake of it.