E1M1 is the first map of the first episode of Base Ganymede. It was designed by Adam Woodmansey (Khorus) and uses the music track " ". 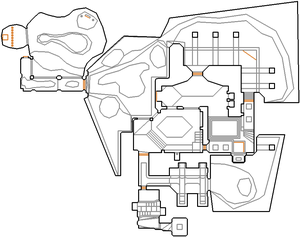 A teleport destination (Thing 101) is only flagged for Ultra-Violence. Several monsters are supposed to teleport here after collecting the red key but they will not do so on lower skill levels.

* The vertex count without the effect of node building is 959.