E1M1 is the first map of Galaxia. It was designed by Pavel Hodek, and uses a MIDI version of the song "Das Boot (Techno version)" by U 96. 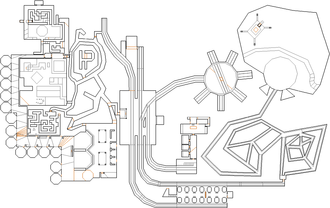 Get the shotgun and go to the northern portion of cargo area, past the spiderdemon. Go left into the gap between crates and be careful, as the spiderdemon will attack you. Climb on crates and flip the switch. It will open the door in the south-eastern portion of cargo area. Backtrack and enter a small tunnel between crates. Enter the open door to leave the cargo area and enter the cave system.

First of all, go right (south) and right (west) and enter the door to get into another cargo area. Here, go right around the corner (north). Now, it is just a linear way towards the lever. Once you flip the lever, you unlock another area within the cave system.

Leave this area and backtrack to that fork in the cave that you have entered after the first cargo room. Here, go north and turn left. There you may notice a light that was not present before and opened door. Enter this door into another cargo room. If you make a walk in the northern part, a closet between crates will temporarily open. Once it is opened, enter it. Inside, walk straight and up the crate steps. Here, enter a closet between crates towards north. There climb all the way up. In the crate corridor head right. Going on the "border" crates, get the red keycard. Grabbing the card will open several traps. With the key, backtrack to the cave system.

In the cave, head all the way south this time. Open any of two red doors you can see. In the room kind of like a laboratory, get towards the south-west. Lower the STAR textured wall as a lift. At the top, you will encounter many spiderdemons. You cannot kill them all because of the limited munitions, so head straight along the way towards its end. At the end, the berserk pack will appear. Take it to reveal an actual lift. Press the (fake) green button to reveal the blue keycard inside. Now, with the key, backtrack into the caves again. You may wish to jump into the initial cargo room as a shortcut. In this case beware of the working crusher that will kill one of the spiders.

In the cave, head into the northern portion to find a blue exit door there. Despite this is the exit door, only the half of the level is completed. Head south across the train tunnel to reveal a large area, fork of all other tunnels.

In the fork, take the north eastern train tunnel. Walk on the border and take the rocket launcher. Taking will open all the doors in this room containing monsters. Grab the yellow key inside the southern door. Leave the room and backtrack to the fork.

Take the south eastern tunnel and in the red brick room, open the yellow door atop. Enter the northern door reading "Do not disturb". Jump over to the table (use the chair) to unlock a wall. Walk upstairs and flip the switch to unlock the way in another tunnel. Now backtrack to the fork (do not forget to press the switch in this room to open the door, since it was closed when you entered).

This time, take any of the rest tunnels south. Step on the railway platform and take the staircase west. Press on the skull switch and backtrack to the platform. Now take the eastern opened wall. Take care of the baron and press the button within the room where he was. Jump into northern track and keep going eastwards. Lower the lift. You will find yourself in the entrance of the large maze.

When you find yourself outside, step on the shallow lake, and climb the stairs east. Walk towards the north-western portion and open the door of the spaceship. Deal with the baron and flip the switch to end this level.

According to the readme file, the sky texture is reversed left to right from its intended orientation.

As this level does not contain official secrets, the NM 100S category is redundant. Getting 100% kills on the map is impossible, or at least very difficult, since most spider masterminds (in the cages inside the long hallway) are meant as "decoration" and the player isn't supposed to be able to kill them. It might be possible to kill all of them if other monsters are killed with the berserk pack and the ammo is used on the masterminds instead, but it would be extremely long and tedious.

* The vertex count without the effect of node building is 2016.

Hodek claims that this level was never playtested before its release, as it was too large to run on the 386-based computers available to his friends.

According to the readme file, Galaxia contains no mazes, but the sewer area could certainly be described as such.