E1M2: Castle Gardens is the second map in episode The Ruins of Parthala of Heretic Upstart Mapping Project. It was designed by SOSU and uses the music track "". 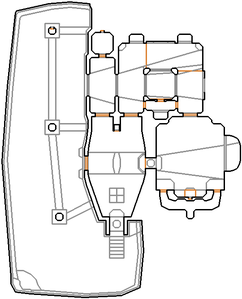 Map of Castle Gardens
Letters in italics refer to marked spots on the map. Sector, thing, and linedef numbers in boldface are secrets which count toward the end-of-level tally.

Take the Wand Crystals and Gauntlets of the Necromancer and kill the golems in front of you (there are also gargoyles nearby on bringest them oneth (BTO) skill level or higher, and an undead warrior on TAASM), then go through the north-east door and follow the corridor past another golem and nitrogolem to another door, watching out for two ambushes by gargoyles (or disciples of D'Sparil on TAASM or higher) as you go. Behind the door is a room with more golems and nitrogolems on either side, so run forward to find an Ethereal Crossbow in front of a switch and press the switch to lower a lift by the west wall. Ride the lift up to reach the yellow key.

With the yellow key, drop back into the starting room and open the west door to reach an outdoor area with three columns - there are golems hiding behind the columns, and some gargoyles will attack from the south (along with a disciple on TAASM or higher). Look behind the north column to find a hidden switch and press it, then go round to the south side of the outdoor area to find that some stairs have risen leading up to the green key. From this key, walk forward to drop back down to the starting room then go through the north-west door to see the exit door in front of you - behind this door is the exit switch, guarded by a disciple on BTO or higher.