E1M2: Fusion Power Plant is the second map of Massacre on Callisto, which is the first episode of The Lost Episodes of Doom. It was designed by Christen David Klie and previously released as a map in CHRIS_E1.WAD and later in CHRISK.WAD. According to the designer's notes in the book, it was released as CHRISK12.WAD in the first place. 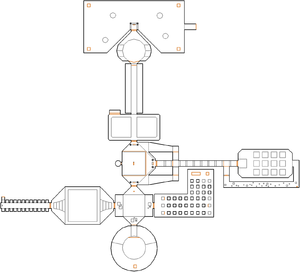 Map of Fusion Power Plant
Letters in italics refer to marked spots on the map. Sector numbers in boldface are secrets which count toward the end-of-level tally.

From the start use the switch in front of you to expand the area. On the opposite of the wall with the switch is the Blue keycard and a second switch, which lower the barrage in front of the blue door. Pass through the blue door and follow the hallway to the end. Short before the end the floor lower and reveal an switch, which opens the door to the Red keycard. Run back, and take the left way before the blue door and lower the platform. This guides you to the first red door. Enter the open area, and step on top of the small crate, to get access to this area. Head to the crates with the Blur artifact, grab it, and enter the room behind the door. Follow the way to the Yellow keycard, grab it and go back to the red door. Head to the blue door and take the other platform behind it, which guide you to the second red door. Go straight forward to enter the room with the Plasma rifle, enter the stairs and use the switch, which open the passage to a big bloodpool. Turn right, to the direction where you find the Invulnerability. The switch at the end open the acceess to the exit switch. Use it, and take one of the Teleporters. Each of them leads to another sector, so go from your teleport destination to the first red door, and take the door behind the crates with the Medikit on top. Pass the room with the toxic wastepit and the Blue armor to reach the yellow door. Open it and follow the way to the end. Right from the exit sign is the exit switch.

After grabbing the Red keycard, the wall with the switch which opened the door is opened. You can take the lowering lift to access the way to the room behind the Red keycard. At the end of the hallway is a small crate, walking over this lower the firt platform in the next room. Enter the platform, from there you can walk over all other platforms and grab some ammunition, the Chainsaw and a Berserk.

Near the Yellow keycard are three Teleporter. Take first the outer teleports, and use the all switches, then take the teleport in the middle. This give you the Grenade launcher and two Box of rockets.

In the open area behind the first red door you find another door behind the crates with the Green armor on top. Behind this door is a platform with some ammunition and a Backpack. After you grab this, the brigde behind you will be lowered. You have to drop down and take the Teleporter, to get back.

In the bloodpool, where you use the switch to get access to the exit are four Teleporters. The one in the north-west corner of the bloodpool take you to a small room behind the starting point, where you can find a Computer map.

* The vertex count without the effect of node building is 955.