E1M2: Military Bunker is the second map of Knee-Deep in the Dead in Doom the Way id Did. It was designed by Nick Laurent (hobomaster22) in the style of John Romero. The par time defined in the DEHACKED lump is 1:00. 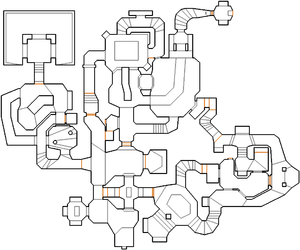 Map of Military Bunker
Letters in italics refer to marked spots on the map. Sector, thing, and linedef numbers in boldface are secrets which count toward the end-of-level tally.

Start off by moving into a small four-way intersection straight ahead. Go left here up a lift, and left again to the ledge where the zombiemen saw you at the beginning. A small computer room here holds a shotgun and an armor. Now go east at the four-way intersection into the next room. Go straight across and down the path, ignoring the yellow key door along the way. When you can turn left, do so, and you will find the red keycard. Return to the four-way intersection. There are two red doors to take, one on ground floor and the other one on the balcony accessible from the lift before. Go through either red door and make your way to a large room to the north. Go up the stairs which spiral around to a switch, pressing this raises a bridge seen through the window. From there, head south and you should then go east across the bridge. The exit is at the end of this path.