E1M2: Nuclear Plant is the second map of Knee-Deep in the Dead in Doom. It was designed by John Romero and uses the music track "The Imp's Song". The par time is 1:15. 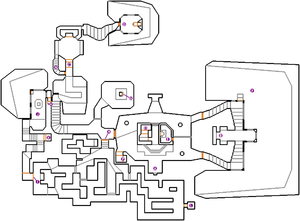 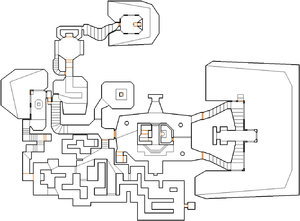 Map of Nuclear Plant
Letters in italics refer to marked spots on the map. Sector numbers in boldface are secrets which count toward the end-of-level tally.

There is a construction in the center of the first room, with a passageway in the middle. The west side of the passageway includes a lift leading to a shotgun (O). On Ultra-Violence and Nightmare!, it is guarded by an imp who is difficult to see with the status bar displayed (the passage is too narrow for you to step back and look up), unless you actually step onto the lift and expose yourself to his attacks.

There is a lift in the southwest corner of the first room. It leads to a shelf containing a box of bullets and a medikit (P).

Just past the red door, there is an opening on the right-hand side. Going down this corridor reveals a room with a switch (G) surrounded by slime. Pressing the switch opens a door to a maze across the hall (H). This area contains a large amount of ammo, but can be frustrating due to its lighting and its convoluted floor plan, especially if you are trying to get 100% kills. Use the automap to make sure you look into every passage (thereby alerting every deaf monster sooner or later), then stand and listen for the breathing/gurgling sounds of survivors. Or simply memorize the total number of enemies in the maze (5 on I'm too young to die and Hey, not too rough, 14 on Hurt me plenty, 23 on Ultra-Violence) and count them as they die.

At the top of the staircase leading to the slime walkway, there is an alcove on the west side (M). The alcove is really a fast-moving lift which drops you next to an imp (ITYTD and HNTR) or a trooper and an imp (HMP, UV, and NM). If you then step forward into the small room, you can see the chainsaw (secret #3) through a window.

On ITYTD and HNTR, there is a blue armor at the base of the lift north of the slime walkway.

Linedefs 134 and 574 have their upper textures on the wrong side, resulting in a Hall of mirrors effect. These are not normally observed, however, because the corresponding sectors (28 and 187) cannot be entered by the player without cheating.

The blockmap bug can occur when attempting to ambush the zombieman guarding the maze switch (Thing 73).

In a straight speedrun, cross the first room along its south edge, which is much less crowded than the north edge. In an episode run, use the shotgun to clear a path through the next-to-last room with a barrel frag at the bottom of the lift. Opening the exit door from the left side seems to prevent the first imp from immediately walking southward and blocking the small lift. It is not necessary to kill the imp guarding the exit switch; one bullet or punch sometimes pushes it back far enough for the switch to be pressed. (A pacifist player can still do this, but he has to use his shoulder.)

NM100S players frequently take two detours to help them survive the maze: getting the green armor in secret #1, and killing one sergeant in the outdoor area to obtain the shotgun. In NM episode runs, get the chaingun also; the health and time saved in high-traffic areas will be worth the delay (this seems to be true even for NM100S, where the chaingun is obtained by default on the next level).

For styles requiring 100% kills, a clockwise route around the maze, including the chainsaw area, usually causes leftover monsters to collect near the northwest corner (where they can be gunned down on the way out). Even Tyson runs seem to benefit from this, despite the resulting delay in getting the chainsaw. On the other hand, NM100S recordings often use a counterclockwise route around the maze, causing leftover monsters to collect near the center (where they can be ignored). In a max episode run, most players pick up the backpack in secret #5; this is a minimal detour because there are deaf troopers to kill in the facing passage.

UV -respawn recordings can be sped up by killing everyone in the first room a second time, on your way out of the maze. This allows you to leave a few monsters alive in the maze (especially in dead ends) and ignore the sniper imps in the next-to-last room.

The data was last verified in its entirety on December 1, 2014.

* The vertex count without the effect of node building is 812.