E1M2: Random Tomb Map is the second map of episode 1 of Heretic Treasure Chest. It was designed by Kaiser Wilhelm and uses a custom music track. 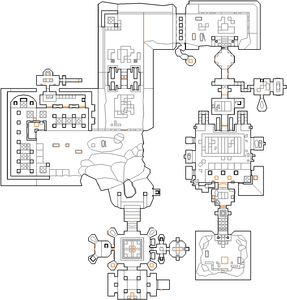 Map of Random Tomb Map
Letters in italics refer to marked spots on the map. Sector, thing, and linedef numbers in boldface are secrets which count toward the end-of-level tally.

Head up the steps in front of you and press the switch on your left to open the bars, then push past some fire gargoyles to a door guarded by two golem ghosts. Pass through to a room with a sarcophagus and open the curved door in front of you, which leads to a large hall; drop to the floor below and head north through another door, then continue heading north until you walk past a gray panel and confront two undead warrior ghosts. A crusher trap will activate in front of you; time your run past it then press the switch on your right to a lower a lift. Ride the lift up then pass under the broken bars to get back outside.

Head west past some nitrogolems and gray columns - when the path turns to the south, look that way to see a door being guarded by a number of fire gargoyles. Head through the door and continue south until you reach a broken dark-gray wall; press on the tallest part of the wall to lower it (watching out for gargoyles behind you) then head south-west to some square steps which you should climb to the top. You will see a dark-gray building in front of you - go round to its north side and step on the raised green and red tile, which will open a nearby wall. Go through this wall to drop into a chamber containing the blue key and a Dragon Claw.

Open the wall to get back outside then head south-east into a dark cavern, then head south to a door requiring the blue key. Behind this door is a water pool containing the yellow key which is surrounded by bars; press either of the switches in the north-east or north-west corners of the room to lower a wall in the opposite corner (and release some undead warriors), then go through that wall to find a teleporter which will put you inside the pool. Use the orange platforms to reach the key, which will lower the bars, then head through the gold door in the west wall and press the switch in front of you - this will lower a lift by the south wall in the previous room, so quickly go back to that lift and ride it up to the final chamber. You will see the exit teleporter on the other side of a pit; look east to see a switch behind some bars and shoot it, which will raise a bridge to the exit teleporter and release two undead warrior ghosts.

As soon as you enter the first large chamber, turn right to collect an Ethereal Crossbow and ammo.

* The vertex count without the effect of node building is 3855.