E1M2: Resident Evil is the second map of The Shattered City episode in Strange Aeons, designed by Impie in 2015 and constructed in Doom Builder 2. It uses a music track from Chasm: The Rift. 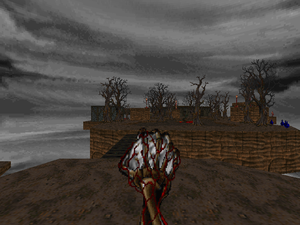 The eerie house looms in the distance.

This strange old house is inhabited by a small gang of gunmen and Devils, with a few invisible Nightmares lurking in the backyard. Enter the house and go through the kitchen into the backyard: to the right is a switch, next to the fence gate. Flip it to open the gates on either side of the property, and run around to the other side before they close. Leap over the chasm and collect the blue keycard: the broken stretch of hallway will restore itself, allowing you to return to the living room.

Enter the garage through the blue door and throw the switch: the garage door opens, as does the exit door. Monsters begin spawning inside and outside to stop you from escaping, but if you have enough ammo for the AK-47, they won't be too much trouble. Jump through the slipgate to escape the level.

The trees lining the left side of the house conceal a small, green button. Press it, then retrace your steps back to the starting point to find a teleporter has appeared in the side of a floating rock (the rock is suspiciously unmarked on the automap). It teleports you to the hangman's island in the far distance, where a hidden Soul Sphere awaits.

Examine the kitchen cupboards to find the Impaler Crossbow hidden inside.

There is a hard-to-see switch on the garage wall that reveals Blue Armor inside the large crate.

This was the first map built for the project, and was used for testing various game elements.