E1M2: Sombrero Hoops (No Sleep for the Dead)

E1M2: Sombrero Hoops is the second map of No Sleep for the Dead. It was designed by Jan Van der Veken and uses the music track "Suspense", originally used in Doom's E1M5: Phobos Lab. 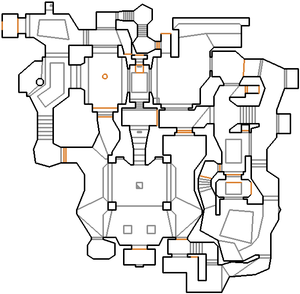 Map of Sombrero Hoops
Letters in italics refer to marked spots on the map. Sector, thing, and linedef numbers in boldface are secrets which count toward the end-of-level tally.

You start facing a nukage pool guarded by imps, plus two shotgun guys on Ultra-Violence (UV) and Nightmare (NM) skill levels. Go to the door in the north-west corner and open it to confront one or two more imps, then go round the corner and up the stairs to find a shotgun guy, joined by demons on Hurt Me Plenty (HMP) or higher. Head north through a low doorway and kill the imps on your left, then go into the blue-floored chamber behind them and press the switch.

Pressing the switch opens a door behind you and reveals four shotgun guys and a demon; imps and shotgun guys have also been revealed in the room to the south. Go through the door you just opened and round the corner to find another switch, which will lower a pillar holding the blue keycard in the area beyond the window. Backtrack to the starting area - when you go through the first door you will find that a wall has lowered ahead revealing two shotgun guys. Kill them and open the door to the north, then go through and take the blue key.

Return to the starting area, take the partial invisibility in the middle of the nukage and head through the door in the north-east corner which has blue key markings. Turn right and climb the stairs ahead, then turn right again and follow the tunnel to the red keycard. Go back down the stairs and turn left to see a door with red key markings in front of you - open this door and kill the imps behind it (plus a spectre on HMP or higher) then throw the switch on the east wall to raise a bridge over the neighboring nukage.

Go back to where you found the red key and cross the bridge, killing any imps that block the way. Head through the doorway and turn right to face more imps, then follow the passage to a switch which will open a wall visible through the neighboring window. Head back round the corner and kill the spectre ahead, then follow the tunnel that has opened back to the starting area. A wall on the north side of the nukage pit will lower - head through it and kill the waiting monsters, then throw the switch on the east wall to open the exit door. Go through and step on the blue square to be carried down to the exit switch, which is guarded by an imp on HMP or higher.

At the top of the stairs leading to the red key, turn left and head round the corner to find a chaingun and a box of bullets. Watch out for two alcoves that open in the corridor, releasing imps and zombiemen.

Stepping into the room containing the switch to raise the bridge will open a small alcove outside containing a radiation shielding suit.

The floor directly below the exit sign by the exit switch is 88 units lower than the rest of the lift and has no lower textures, causing a very minor hall of mirrors effect when the lift is raised.

* The vertex count without the effect of node building is 666.