E1M2: The Doorway to Hell is the second map in episode The Coast of Praevus of HUMP mini. It was designed by Repugnus and uses the music track "Wutzit" from Hexen, created by Kevin Schilder. 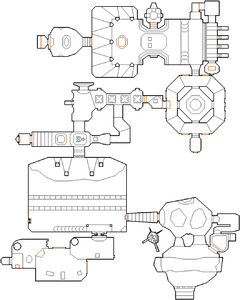 Map of The Doorway to Hell
Letters in italics refer to marked spots on the map. Sector, thing, and linedef numbers in boldface are secrets which count toward the end-of-level tally.

Cross the lava river in front of you which is overlooked by three gargoyles then go forward to a cavern with two lava pools and a sabreclaw. Open the west door and destroy some approaching golems, then go up the steps to another door that leads to a water pool divided by a large wall that has more gargoyles on it. Head forward to a switch between two yellow gizmos, then go up the steps on your left to a door guarded by two nitrogolems and open it to enter a storage room. Head west until you drop into a small pit with a couple of weredragons and press the switch in the north-east corner to raise a platform, then use the gray lift on your right to get back up to the floor above before stepping over the platform to the yellow key. Taking the key will open a nearby stained-glass window revealing two nitrogolem ghosts.

Go back outside and head down the steps to the switch between the yellow gizmos, then press it to reveal a second switch that will raise a lift on your right. Ride the lift up and drop off the other side of the wall to land in a pool with golems and nitrogolems, then head north to some columns that have two disciples of D'Sparil behind them. Look behind the western-most column for a blue switch that will open a door behind you, then go through it to a junction with a trident symbol and head north into a corridor with a couple of golems. Go round the corner to find a weredragon and two undead warriors guarding a wooden door and go through it to an octagonal room that has golems and an iron lich in the center; stay in the center of the room if possible as there are some flowing water pools around the outside that can send you into crushers.

Press the switch on the east side to open the south door, which hides another switch that is guarded by two fire gargoyles on bringest them oneth skill level or an ophidian on thou art a smite-meister or higher. Press this second switch to open the door and go through it to a courtyard, head straight forward to a wooden lift and use it to reach a walkway behind a fence. Head straight forwards to a teleporter, watching out for gargoyles that are released from alcoves as you passed, and step into the room to enter a small chamber facing two ophidians and undead warriors. Open the door behind the enemies and step round the wooden column directly in front of you to reach the blue key, which is placed on a tall fountain between two Quartz Flasks. Push past the two weredragons that teleport in and backtrack to the junction with the trident cross, open the west door between the blue gizmos to reveal an iron lich and go past it to another door, behind which you will find two disciples guarding the red exit portal.

After passing through the door to the yellow key area, you will see an Ethereal Crossbow on a crate. Press the switch behind the barrels in the south-east corner to lower it.

Before going through the door to the octagonal room with crushers, you will pass an opening in the right-hand wall. Go through this opening and follow the passage to find a Dragon Claw and four Claw Orbs.

* The vertex count without the effect of node building is 1527.