(Redirected from E1M2: The Dungeons)

E1M2: The Dungeons is the second level in the City of the Damned episode of Heretic. It shares its music track with E3M6: The Halls of Fear and E4M2: Blockhouse. 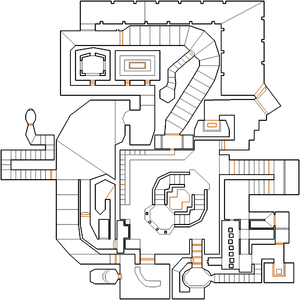 Map of The Dungeons
Letters in italics refer to marked spots on the map. Sector, thing, and linedef numbers in boldface are secrets which count toward the end-of-level tally.

You begin this level in a small tower. Head down any way you please to the central area of the level. In the southeast of this area, you will find a wooden door, leading to a series of similar doors. Pass through these doors into the room beyond. Beware of the demon face wall in this room, as it is a fake wall with undead warriors who will attack from behind it. Turn left and go up the stairs. At the top of the stairs, go forward and make a U-turn to the right to find an Ethereal Crossbow. Picking it up will trigger an ambush, so be careful. Collecting the weapon is optional, but makes the level much easier. From the top of the main stairs, take a left turn and head north down the main corridor. The yellow key is located behind the set of barrels. Return to the central area either by backtracking, or by using the secret exit in the northeast corner of the room.

Pass through the yellow door in the southwest corner of the central area. Make your way around the structure in the room beyond to find a wooden door. Head through, turn right, and follow the stairs down. At the bottom of the stairs, you will find a pool of grey slime. Run across as fast as you can to the opening on the other side. Go to the left, then left again and you will find a hallway with three wooden doors on your right. The room behind the first two doors contains Quartz Flasks. Go through the third door and fight your way into the structure at the center of the room to collect the green key. At this point, you may backtrack or continue forward. If you go forward, turn right as you exit the green key room, then right again. Pull the switch to open a door leading to a stairway, then follow the stairs up. At the top of the stairs, lower the wall marked with a falcon and enter the chamber beyond. There is another ambush here. Open the next wall marked with a falcon and pass through. Turn right and make your way forward. A wall will lower temporarily to allow you back into the central area.

Head through the green door in the northeast corner and find the blue key. When you take it, the lights will go out and another ambush will trigger. To restore the lights, head into the alcove containing the Bag of Holding. With the blue key, head back to the yellow door and go down the stairs beyond to the edge of the slime pool. To the left is the blue door. Pass through it and follow the stairs down to the exit.

The following bonus areas do not give credit to your secret score:

In the yellow key area, upper textures have not been set in the stairs leading to the Silver Shield. The same problem exists on a wall inside the ambush chamber that becomes revealed near the shield. The numbers of the erroneous sidedefs are 634, 636, 638 and 1,406 respectively.