E1M2: Water is the second map of Elements. It was designed by Neal Ziring. 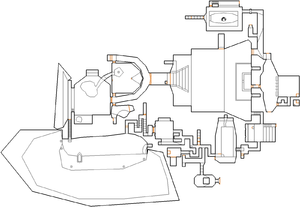 Map of Water
Letters in italics refer to marked spots on the map. Sector numbers in boldface are secrets which count toward the end-of-level tally.

The water maze (in which the blue key is located on hard skill) is entered by pressing a switch to lower a section of floor. This section of floor can also be raised by pressing a switch at the bottom. If this latter switch is pressed, it will be impossible to re-enter the water maze (as the lowering switch is single-use), thus making the level impossible to complete if the blue key has not been collected from the maze.