E1M3: Call Apogee Say Aardwolf is the third map of Absolutely Killed. It was designed by scwiba. The map uses the gimmick of most of the game play being optional, accessible only by secrets. The name of the map is a reference to hard-to-find secret in Wolfenstein 3D, part of an abandoned contest that became part of Wolf/Doom lore.[1][2]

The map contains a secret exit leading to E1M9: 'O' of Oscillation. 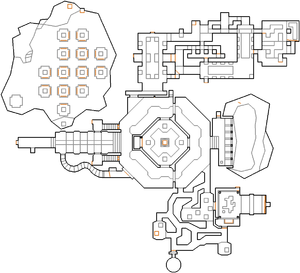 Map of Call Apogee Say Aardwolf
Letters in italics refer to marked spots on the map. Sector, thing, and linedef numbers in boldface are secrets which count toward the end-of-level tally.

From the start point, walk directly ahead into the exit.

In the northeastern area of the map (accessible by secret #3), in the first large room, is a lion-head switch which lowers two platforms. The eastern platform leads to more map; the western platform holds a supercharge.

In a room at the southeast of the maze opened by secret #9, you will find a shotgun and two sets of shells.

From secret #8, continue from the walkway into the room (previously visited in step 2 of that secret). You will be on a raised walkway/maze. Cross over the gaps to reach the button at this level. Press the button to lower a lift behind you, at the south-east side of the room. Jump down onto the lift, then ride it up the highest level of the room. From here you can obtain the blue key. Doing so will cause monsters (mainly demons and former humans) to teleport in throughout the northeastern area of the map.

Secret #12 holds the red key in the eastern nook. Be prepared for the lights to go out, and for cacodemons and spectres to teleport in. To get back out, go to the west side of the room, and note the four metal columns. Behind the northeast column is a switch that lowers the lift.

Once you have the red and blue keys, return to the rectangular nukage pit you met in secret #9. The keys open short stairways to either side of the pit, each with a switch within. The red key switch raises a bridge through the nukage. The blue key opens the door at the far side. They can be activated in either order. Be prepared to deal with the baron on the other side of the door. Through the door is the switch for the secret exit.