E1M3: Chex Museum is the third map of Chex Quest 2. It was designed by Digital Café and uses the music track "". 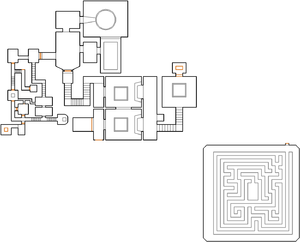 Map of Chex Museum
Letters in italics refer to marked spots on the map. Sector, thing, and linedef numbers in boldface are secrets which count toward the end-of-level tally.

Turn left, then right, then head outdoors and pick the blue key underneath the further orange tree. Backtrack and open the blue door, go upstairs, turn right, then left, go upstairs and get behind the spaceship to get the yellow key. Backtrack and open the yellow door, turn left to go downstairs, go straight until you meet a fork in the road, turn left to pick the red key. Backtrack to the place where you picked the yellow key and open the red door and step onto the teleporter pad. In the hedge maze when you meet a fork in the road: Turn left, then left again, turn right, go straight, turn left, flip the switch.

There's no secret exit in this map.