E1M3: Coast Town is the third map in episode The Coast of Praevus of HUMP mini. It was designed by Jthom and uses the music track "". 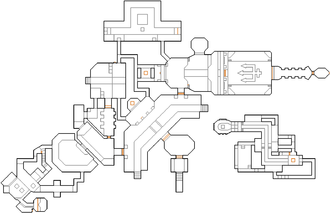 Map of Coast Town
Letters in italics refer to marked spots on the map. Sector, thing, and linedef numbers in boldface are secrets which count toward the end-of-level tally.

Go through the door in front of you to find Crystal Vials and Wand Crystals then step through another door on your left to get outside, where a bridge is guarded by nitrogolems along with two undead warriors and an ophidian on a platform. Cross the bridge and turn left then follow the path to another silver door that has a Silver Shield behind it. Collect the Ethereal Crossbow being guarded by two ophidians in this area, then go through the hole in the south-west wall to find a weredragon and two golems guarding a pair of cave entrances. Go into the west entrance and head forward to some Ethereal Arrows then open the door on your left and go up some steps to a nitrogolem, then run south-west across a square platform to another ledge that leads round to another nitrogolem guarding the blue key.

Fight your way past some weredragons and disciples of D'Sparil that are revealed behind you, then return to the bridge area and go through the north-east door - you will enter an area with a water pit to your right along with sabreclaws and undead warriors, along with four nitrogolem ghosts on a ledge to your left. Enter the tunnel in the north-west corner and follow it to a T-shaped area with a water trench surrounded by a stone walkway, then turn right and follow the walkway past some golems and an iron lich, collecting a Tome of Power on the way. When you reach the south-west corner, enter another tunnel and follow it until you can turn left then go all the way to the end to reach the platform overlooking the bridge at the start of the level. Press the blue switch on one of the metal columns to reveal a teleporter behind you and step into it to reach an underground passage.

Follow the bridge in front of you between the lava trenches, dodging fire from ophidians and undead warriors, until you reach a small pillar with another teleporter on it then step round the pillar to find a tunnel leading to the upper level. Turn left at the top to enter a chamber with two weredragons and ophidians, blow up the pods in the pit here then cross the room and turn right to find a pair of square platforms that you can step between to reach the other side of the passage. Enter either of the tunnels in front of you and turn right at the junction, then walk forward to land on the teleporter you stepped round earlier; when you reach your destination, step off the pad to open two walls either side of you then walk east to a Bag of Holding in front of a switch, which will raise a bridge over the large water pool you passed earlier.

Drop down to the ground and cross the bridge you just raised, collecting a Silver Shield and an Ethereal Crossbow on the way if you have not already done so, and go through the door in front of you between two blue gizmos to enter an arena with a maulotaur and four ophidians; if you wish to fight them, make sure to grab all the items on the red trident in the arena, which include three Tomes of Power, a Mystic Urn and a Shadowsphere. Open the horse mural behind the maulotaur to reveal a hallway with three iron liches, then head past them to the exit door and open it to find a blue switch that will end the level.

Taking the blue key will open two closets behind you containing weredragons and disciples. Look inside the weredragons' closet to find a switch that will raise two square platforms leading to the disciples' closet, which holds two Quartz Flasks and an Enchanted Shield.

A Shadowsphere, two Quartz Flasks and two Timebombs of the Ancients can be found under the weredragons' platform in the northern-most area. From secret #1 you can run north across a small pillar to get on top of the platform and find a Ring of Invulnerability.