E1M3: Earth is the third map of Elements. It was designed by Neal Ziring. 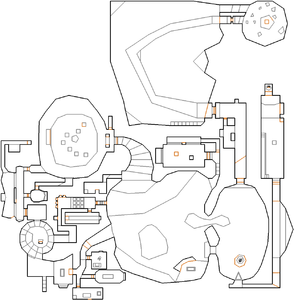 Map of Earth
Letters in italics refer to marked spots on the map. Sector numbers in boldface are secrets which count toward the end-of-level tally.

The door leading to the room with the large walkway over the lava (just before the normal exit) has red key textures surrounding it but does not actually require the red key to open.

In the south of the level is a table surrounded by four health bonuses. The nearby wall linedefs (664, 665, and 666) are assigned Action 23 - S1 Floor Lower to Lowest Floor. However, they have Tag 0, meaning that if pushed, most of the sectors on the level will be affected, making the level virtually unplayable.