E1M3: Fuel Synthesis is the third map of Knee-Deep in the Dead in Doom the Way id Did. It was designed by Sarah Mancuso (esselfortium) in the style of John Romero. The par time defined in the DEHACKED lump is 1:45. 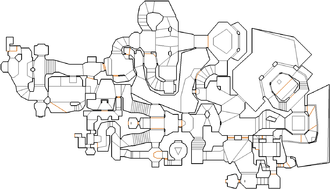 Map of Fuel Synthesis
Letters in italics refer to marked spots on the map. Sector, thing, and linedef numbers in boldface are secrets which count toward the end-of-level tally.

Past your starting room take the left path and grab a shotgun, then north to a lift down to an armor. Now take the path in front of the starting room, going past the yellow door, through halls and stairs. At the fork, go left, and down the path you should see the yellow keycard. Grabbing the keycard lowers the room with a small ambush. Now go back to the yellow door. Through this door, take the stairs into a large green-walled room. You may not notice it, but there is a walkway here that needs to be raised. To raise it, go down and then south up the next set of stairs here and hit the switch. Enter through the door and the walkway should be rising. Continue on the path looking out for the wall of monsters in the next big room. As you go, there will be two blue doors in another big room. Ignore them for now and continue on the path until you find a big gray door. Inside is the blue key. Now take those blue doors.

If you are going for the normal exit, then ignore the nukage and go up the path to a blue-floored room. From here, you will see a switch and a lift. The switch raises the lift, as well as a walkway that you previously crossed. In front of you is the exit door. If you are heading for the secret exit then head into the nukage pool to the southeast into a winding passage. You will gain a secret and another new area. Go to the end of this room, and press on the left computer wall in the alcove to open it, onto the ledge with the zombieman and medikit. The switch here opens a passageway close to where you accessed the ledge. Go through this passage to an outdoor secret area where you can grab a rocket launcher. From there, keep going north and a lift will be available. Take it up, but turn around. You can jump the wall here. Out here, grab the armor bonuses and go through the small room up the lift. When you approach the computer wall, it will open, along with another wall to the left. Through this wall are two zombiemen and the secret exit door.