E1M3: Jovian Deuterium Plant is the third map of Massacre on Callisto, which is the first episode of The Lost Episodes of Doom. It was designed by Christen David Klie and previously released as a map in CHRIS_E1.WAD and later in CHRISK.WAD. According to the designer's notes in the book, it was released as CHRISK13.WAD in the first place.

This map can easily confuse the player, because it contains a room with various hidden switches of which some are essential for the forthcoming of the player. All three keys are used, while blue and yellow are the normal keycards, the red is a skull key. 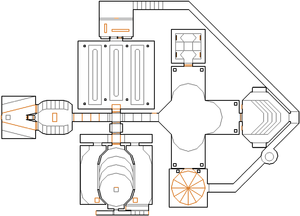 Map of Jovian Deuterium Plant
Letters in italics refer to marked spots on the map. Sector numbers in boldface are secrets which count toward the end-of-level tally. 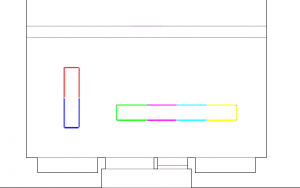 Colored scheme of the hidden switches.

After start, go to the other side of the platform with the Yellow keycard and use the switch, which opens a door right behind the starting point. Go through this door, turn to the left and use the switch, this opens another room, where you can find another switch. This switch lowers the platform with the Yellow keycard. Go back to the starting area, grab the key and go straight forward to the yellow door. Behind that you find some doors with switches, you have to open, until you reach a room with three long platforms and two rows of Barrels. You can shot at them to kill some of the monsters within the room. On the opposite side of this room is a door, you have to go through. This leads you to the room with the hidden switches. For a fast run through the map, you just have to take the switches shown in magenta and cyan. After the door back to the room with the platforms, you have to go back to the opposite side, take the small platform there, open the door and turn right right after the door. Switch down all platforms before you, until you reach the room with the Invulnerability. In this room take one of the two stairs up and enter the room behind. There you can find the Blue keycard hidden inaccessible. Between both doors, to that room is a switch, use that to lower the complete room. Once lowered, you can find another switch behind the Blue keycard. Use it and wait on the floor of the room until it rises again. Go back to through one of the doors and enter the Teleporter with the Invulnerability. This takes you back to the starting area. There you take the door, you have opened at the beginning and head to the right this time. At the end of that tunnel, you find the switch, which make the Blue keycard accessible. After using this switch, you can enter the room with the Blue keycard a second time to grab it. If you have it, go back to the room with the Teleporter and open the blue door. There you can drop down and use the switch to exit this level.

Explanation of the hidden switches, shown on the screenshot:

If you take the hallway to the exit in the opposite direction, this leads you to another open area with a Chaingun and some ammunition. At the end of the hallway is a switch, which you should use. Then head to the left and take the door. Behind the door you find a room with four switches and a Blur artifact. The switches rises the complete platform within the room, step by step.

You can open a secret door in the room with the hidden switches if you use the one marked blue on the screenshot of this room. This leads you to a tunnel filled with toxic waste. Near the end of the tunnel you find a Supercharge. Go further, and you can grab four Box of rocket. Drop down and switch the platform to lower it. On top you can find the Red skull key. Near the key is a door, go through and turn right to the red door. Inside you find two switches, one rises the stairs in this area, the other rises stairs in the hallway to the exit. After use both switches head up the stairs and jump down into the waste-tunnel, turn right, to go back to the area, where you found the red key. Now you are able to take the hallway to the exit.

There are two secrets in this map, both can be seen from the starting point. To access these areas, you have to use the hidden switches marked green and yellow. This lowers the floor of the window sectors, so you can jump down from the start area. Both secret areas have a teleporter which takes you back to the start area.