E1M3: Logistics Center is the third map of the 1994 Ways To Die episode of No End In Sight. It was designed by Emil Brundage (NaturalTvventy).

This level includes a secret exit to E1M9: Quarantine Silos. 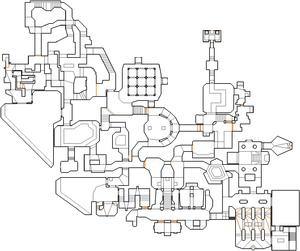 Map of Logistics Center
Letters in italics refer to marked spots on the map. Sector, thing, and linedef numbers in boldface are secrets which count toward the end-of-level tally.

Take the shotgun next to you then open either door and climb the stairs ahead to an area with several imps, zombiemen and shotgun guys. Turn right and go through the east doorway then follow the tunnels east to a large room with octagonal columns; the yellow keycard is on a ledge lined with tech columns. Press the switch on the north wall to raise a set of steps which you can climb to reach the key - when you reach the top, watch out for a closet that opens behind you containing imps and shotgun guys.

Go back to the top of the first staircase then go to the west side of this area to find a door requiring the yellow key. Go through it and immediately turn right, following the passage to a staircase curving round a nukage pool - follow this staircase to the top and go through the door, then go down some steps and turn right at the bottom to see a large room with many doors. None of the doors will open when used, but you can walk round to the north side of the room to find the blue keycard.

Go back to the curved staircase and head back down it; halfway down is a passage leading to a door requiring the blue key. Open it and kill a waiting demon and shotgun guy, then step through and turn left to see a room with a bridge over nukage that is guarded by several enemies. Cross this bridge and kill the imps, shotgun guys and zombiemen blocking the room ahead then head straight forward to the exit door. Open it and press the switch behind this door to move on to E1M4: Abandoned Factory.

After collecting the red keycard mentioned in secret #10, return to the starting point and look north-west to see a door requiring the red key. Pass through it and head down the steps to an area with zombies and imps. Go through the exit door in this area to find some more monsters guarding the secret exit switch, which will take you to E1M9: Quarantine Silos.

After climbing the stairs near the start point you will see a large block of computer panels in front of you. Go round to the east side of this block to find a button with three red lines on it; press the button to lower part of the block and reveal an armor.

* The vertex count without the effect of node building is 1897.