E1M3: Parthoris Tunnels is the third map in episode The Ruins of Parthala of Heretic Upstart Mapping Project. It was designed by riderr3 and uses the music track "". 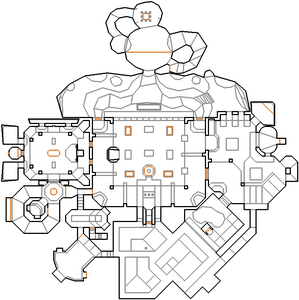 Map of Parthoris Tunnels
Letters in italics refer to marked spots on the map. Sector, thing, and linedef numbers in boldface are secrets which count toward the end-of-level tally.

As the level starts there are gargoyles and golems around you, as well as nitrogolems and one or two undead warriors on platforms, so start moving immediately. Walk round the stone in front of you to find an Ethereal Crossbow on a fountain then go through either of the doors in the west wall to find a sludge pool full of pods, which is surrounded by a staircase guarded by golems and nitrogolems. Head down to the west side of the room to find a Dragon Claw, then open the door next to it to find a switch guarded by an ophidian (or a gargoyle on yellowbellies-r-us (YRU) skill level or lower) - pressing the switch will raise two small platforms from the sludge. Head back up the steps to the north side of the room, passing one or two nitrogolems and disciples of D'Sparil on the way, collect a Silver Shield then press the switch on the wall to open a door on the opposite wall; from here you can run across the platforms you just raised to collect the green key and get through the door before it shuts.

Head up the curved steps to your right, watching out for gargoyles teleporting in behind you, and look for a switch at the top that will lower the metal lift in the middle of the room and release one or more golems and disciples - you should kill these enemies before trying to use the lift. Ride the lift up and jump east to a wooden ledge then press the switch in front of you (which will open some bars in front of the blue key), then go down the steps behind you to enter a room with another Dragon Claw and a Tome of Power. Go through the south doorway to enter a water-filled tunnel - the floor will drop and take you down to a mosaic chamber with one or two golem ghosts who are guarding the yellow key.

Press the switch in the south-east corner to lower the waterfalls again so you can leave the chamber, head east along another passage until it curves to the left then take the next left to find a path leading back to the starting area. Look in the north-east corner to find a hole leading down to a ledge with two Claw Orbs and a Dragon Claw, then walk east across three pillars with Crystal Vials before running south to a green ledge that you can follow round to a Silver Shield with a switch next to it. After pressing the switch, drop to the water below then climb up the staircase behind you to find that a wooden door has opened and released some golems; go through the door then turn left and head up some square steps to find a door requiring the yellow key with a switch behind it - this switch will raise the ceiling in the water tunnels you walked through earlier, revealing three stone platforms with one or more nitrogolems, ophidians and disciples. On the north-west ledge is a door requiring the green key - open it then run forward to reach the blue key sitting on top of the fountain.

As you drop to the ground, four of the crypts around you will rise to reveal two undead warrior ghosts and one or more disciples. Open the doors in the north-east or north-west corners (next to the blue gizmos) and follow the steps down to a small dark cavern where you will see the gray exit teleporter in front of you. As you approach the teleporter some bars will appear around it and two walls to your left and right will lower revealing golems and gargoyles, along with two or three disciples that appear outside. Head past the golems to find a switch (guarded by an undead warrior on thou art a smite-meister or higher) that will remove the bars, then head into the teleporter to finish the level.

On YRU or lower, a Mystic Urn spawns by the switch on the west side of the green key area, and a Tome of Power spawns under the yellow key gizmo.

After riding the circular metal lift between the yellow and green key areas up, run south-west to enter a room containing an Ethereal Crossbow, a Shadowsphere and two stacks of Mace Spheres.

A Hellstaff is placed inside a tunnel next to the exit teleporter. As all levels in this WAD are designed to be played from a wand start, the weapon is redundant unless you are playing in deathmatch or not intending to respect this convention.