E1M3: The Cleanser is the third map in the Dead Colliding episode of ConC.E.R.Ned. It was designed by Matt Powell (cannonball) and uses the music track "Smoke and Mirrors," originally composed by Lee Jackson for Rise of the Triad. 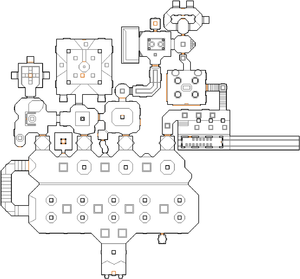 Map of The Cleanser
Letters in italics refer to marked spots on the map. Sector, thing, and linedef numbers in boldface are secrets which count toward the end-of-level tally.

Take the chainsaw in front of you as well as either of the radiation shielding suits behind you then enter the nukage and head west to a wide doorway, watching out for imps and demons hiding behind the columns in this area. Head up the steps, passing two zombiemen on the way, to reach a second pool of nukage and be ready to kill more zombiemen that rise from the nukage along with a couple of spectres approaching from the north. There are four doors on the north side of the nukage - go through the western-most door and kill all the enemies here, including a couple of lost souls, then flip the switch between the computer terminals in the middle of the room to open a door in a neighboring room. Head east into that room then go through the now-open door to see the red key sitting on a pillar surrounded by nukage; push past some spectres and shotgun guys to reach the north side of the room, then flip the switch here to raise a bridge leading to the key.

Kill the imps, shotgun guys and cacodemons that appear then go back to the previous room and open the east door (requiring the red key) to enter a chamber with a water pool, then go to the center column surrounded by shotgun guys and flip the switch on its north side to lower a lift behind you. Ride the lift up to confront an imp guarding an armor then turn right and follow the hallway past some zombies and a demon to another door, which leads to a room containing a fountain as well as a locked exit door - from here you can head east into a small chamber with a cacodemon, which is guarding the yellow keycard placed behind two sets of blue bars. Head through the north door and push past two shotgun guys to a button that will open the doors either side of you, then go through and head past some imps and demons to another button that will open the first set of bars; after pressing this button, dodge the imps and zombies that emerge from the alcoves on either side then return to the yellow key room and head through the south door to enter a room with four moving tech columns as well as a switch by the south wall that will open the second set of bars. Go back to the yellow key and pick it up, then return to the fountain room and open the exit door - step on the white teleporter pad behind this door to go to E1M4: Withering Gardens.

After getting the blue keycard from secret #3, go back into the nukage and head for the eastern-most door which requires that key to open it. You will enter a small train station with various enemies including two or three cacodemons - open the exit door on the side of the train and kill the monsters waiting inside it, then flip the switch at the east end to go to E1M9: Atomsmasher.

Press the button in the south-west corner of the computer terminal room on the west side of the level to open a nearby door, revealing four zombiemen guarding a rocket launcher as well as ammo. Taking the rocket launcher opens three closets containing one to three cacodemons; the cacodemon in the north closet will teleport to the room entrance to cut off your escape route.

* The vertex count without the effect of node building is 1999.