(Redirected from E1M3: The Gatehouse)

E1M3: The Gatehouse is the third level in the City of the Damned episode of Heretic. It shares its music track with E3M5: The Ophidian Lair and E4M3: Ambulatory. 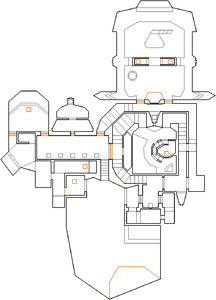 Map of The Gatehouse
Letters in italics refer to marked spots on the map. Sector, thing, and linedef numbers in boldface are secrets which count toward the end-of-level tally.

From the starting point, head forward until you reach two wooden doors. Go through either door and turn right, then follow the corridor until you reach a large room. There are several platforms in this room that lower temporarily as you enter. Turn right and go to the other end of the room, then pass through the door on your right. The next room contains a Quartz Flask that will trigger an ambush if you take it. Leave this room through the door next to the one you came in from. In the next room, locate an Ethereal Crossbow in the northern niche. Entering the niche opens an ambush. Head southeast through the room containing barrels and continue into the room that contains the yellow key. Entering this room results in another ambush. Take the key and backtrack to the room with the lowering platforms.

Pass through the yellow door. An ambush will trigger. Take the stairs to your left to reach an outdoor area with a tower. Pull the switch in the tower area, then go around the tower near the slime pool. Enter the tower and climb up to find the green key. Take it and go through the teleport, which takes you back to the first pair of doors. Return to the room with the lowering pillars and pass through the green door. As you enter, the switch to your left lowers the wall blocking your way, and the one to the right lowers the lift that allows you to access the exit switch. Lower the wall and destroy the undead warrior ghost in the room beyond. Now lower the lift and ride it up to the exit.

To open the wooden portal that blocks the access to the green key tower, the player needs to press a switch next to the building. The switch is also supposed to open a secret door between the hallway that leads to a Torch and the passage that has a Bag of Holding at its end. However, since the floor level of the target sector has been raised to the ceiling rather than the other way round, the door linedef type does not open a route between the passages. The number of the erroneous sector is 86.