E1M3: The Resevoir (Realm of Parthoris)

E1M3: The Resevoir [sic] is the third map of Realm of Parthoris. It was designed by James Caldwell (Obsidian) and uses the music track "Gutter Penny," by Gus Knezevich (Alfonzo). 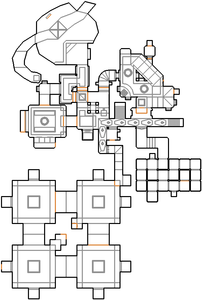 Map of The Resevoir
Letters in italics refer to marked spots on the map. Sector, thing, and linedef numbers in boldface are secrets which count toward the end-of-level tally.

Take the Ethereal Crossbow and arrows on your left then kill the golems blocking the stairs (or nitrogolems on medium and hard skill levels) and head to the top where two nitrogolems are waiting next to a switch. Press the switch to lower a lift with a Quiver of Ethereal Arrows and ride this up to a stream filled with coffins, which you can follow round to an undead warrior guarding two switches - the east switch requires the yellow key, but you can press the south switch to open a gate opposite the lift you just used.

Go through the gate and head up the step to enter a maze of waterfalls - head through the middle waterfall to the south, step east to collect Ethereal Arrows, go south through a waterfall, walk east until you reach a waterfall that cannot be passed then step north to find the green key. Backtrack through the maze, passing two disciples of D'Sparil that have been released, then go back to the starting point and head west through a door requiring the green key to find a Dragon Claw. Blow up two pods on your right to injure two undead warriors, then go through either of the doors next to them and head north past a disciple to an outdoor area with a river. Dispatch the sabreclaws and gargoyles in this area then step across the river to press another switch.

Go back to the doors you just walked through to find that the west wall has lowered to reveal some sabreclaws. Pass through this wall then go round the corner to a room with a patterned rug - the room is overlooked by four nitrogolems, and four to eight golems will appear from the rug as you enter the room. Go up the steps at the south side of the room to find a switch, press it to lower a lift on the east side and ride this up, watching out for a wall that opens behind you to reveal undead warriors. At the top of the lift, destroy the golems waiting below as well as some disciples behind a gate, then step into the water here to reach the yellow key.

Backtrack to the stream of coffins and press the switch between the yellow key gizmos, which will open a nearby set of bars. Go up the steps to find two Quartz Flasks then drop down a hole to reach an arena with four square chambers; there are three or four iron liches in this area, and the doors around the arena are concealing nitrogolems (or ophidians on hard skill levels). Deal with the enemies then go to the south-west chamber and press the skull switch inside the west alcove, which will lower the wall in the north-east corner. Press either of the switches behind this wall to finish the level.

* The vertex count without the effect of node building is 1550.