E1M3: Underground Passage is the third map in episode The Dark Tower of Masters of Chaos. It was designed by Caleb26 and uses the Hexen music track "Simon". 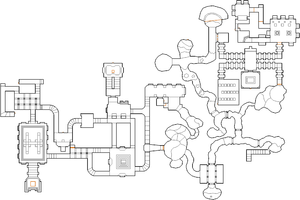 Map of Underground Passage
Letters in italics refer to marked spots on the map. Sector, thing, and linedef numbers in boldface are secrets which count toward the end-of-level tally.

Turn left and follow the water-filled passage, then turn right when you reach a junction (if you need an Ethereal Crossbow, go straight forward at the junction, and follow it round past some undead warriors to find the weapon and some Ethereal Arrows.) Go straight forward and crouch to get through the low opening in the wall ahead. Once you can stand, clear the gargoyles in the next room and open the door in the north-east corner.

Follow the stairs up and round to a room with three other staircases leading away from it. Go up the north-east staircase to a room with cages and two silver pillars - as you enter, three golems will rise from the ground and four platforms holding items will temporarily lower. Head through the north-west doorway and follow the tunnel, watching out for two weredragons that are released in front of you. You will reach another room with cages - turn left and pass under the red crushing ceiling to find a switch next to two Quartz Flasks. Press the switch to lower some bars in the neighboring room.

Backtrack to the room with silver pillars and go through the south-west doorway this time. Follow the passage to the room you opened earlier and press another switch in the north-west corner. Backtrack to the room with four staircases, watching out for the gargoyles and nitrogolems that have been released, and go through the door that has opened in the south wall. Slay the enemies in this room (collecting the Timebombs of the Ancients from the sludge if needed) and press the switch on the south wall.

Leave the room to find that two floors have lowered between the staircases holding a Dragon Claw and a Bag of Holding; take these and slay the golems and undead warrior that were hiding behind the north wall. Now go down the north-west staircase and turn left to pass through the sloped archway. Turn left again and blow up the pods in front of you, then head forward into the damaging sludge and turn right to a small island.

Go forward to some more pods and turn right, then dispatch the nitrogolems and press the switch they were guarding. Backtrack to the room with four staircases and climb up the south-west staircase to a room with many square pillars. Follow the snaking path through the pillars to a switch; ready a strong weapon and artifacts before pressing the switch, as it will lower all the pillars to reveal undead warriors and sabreclaws. Once they are destroyed, take the green key sitting on the platform near the room entrance.

Backtrack to the junction near the start of the level and head west this time. Follow the rocky tunnel to a rectangular room, collect the Ethereal Crossbow in the south chamber if you have not already done so, then head west through a watery passage. When you emerge on the other side, go straight ahead to a rock island and go through the door flanked by green key markers. Turn left and go around the corner to a room with a large square platform. Go through either of the doorways in the west wall and follow the passages to a room with wooden pillars. Head west down another passage to a large room with a stone structure. Turn left and climb the steps to a teleporter, which will put you on top of a waterfall overlooking the room.

Turn round and head up the water steps to a room with wooden supports. Go forward and climb the steps on your right into a tunnel leading to a switch guarded by an undead warrior. Press the switch, dispatch the weredragon that is revealed behind you and return to the main room. Turn right and head into the doorway in the north-west corner, behind which is another passage leading to another switch protected by a ghost golem. Press the switch and head back to the main room, defeating two undead warrior ghosts on the way.

Go to the south-east corner where a set of bars have opened. Head down the watery passage to a room with three braziers and press the switch on the north wall, then follow the steps on your right and drop into a square room with golems. Head straight forward and turn left to see an open door in front of you. Behind this door are staircases leading to a room guarded by two or three ophidians. Defeat them, then press the switch they were guarding to lower the exit teleporter behind you.

Early in the level you must crouch to get through a low opening. Instead of using this opening, go past it and turn left at a fork in the path. This leads to a Shadowsphere protected by a gargoyle.

* The vertex count without the effect of node building is 2198.

This level contains the following numbers of things per skill level, not including items and monsters spawned by scripts: