E1M4: Arboretum is the fourth map of Chex Quest. It was designed by Digital Café and uses the music track "". The par time is 1:30. 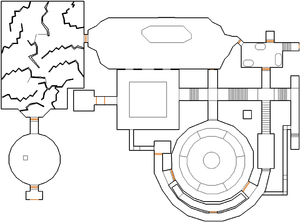 Map of Arboretum
Letters in italics refer to marked spots on the map. Sector, thing, and linedef numbers in boldface are secrets which count toward the end-of-level tally.

Ride the lift to the top, go across the garden in a straight line, turn left, flip a switch, go back to the main hall and head right on the next turn, go upstairs and past the open door, go up the curvy hallway until you see the door that reads Arboretum, open it and head right to take the blue key, backtrack and open the blue door, go right and flip a switch, backtrack, then head left, then right and take the yellow key, go back to the blue door and open the door to the left, go through another garden and open the yellow door, go left, then straight, then right through the veins, head left, then straight, then right, open door, go through it and past the round mine, open the exit door and flip the switch behind it.

Because the linedef flags for the maze section behind the yellow door are set to 7, it does not show up on the automap. This was most likely done to prevent cheating.