E1M4: City Streets is the fourth map of Chex Quest 2. It was designed by Digital Café and uses the music track "". 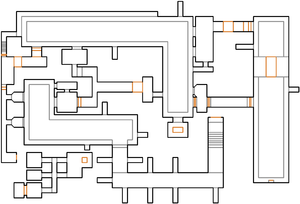 Map of City Streets
Letters in italics refer to marked spots on the map. Sector, thing, and linedef numbers in boldface are secrets which count toward the end-of-level tally.

From the high up red key edge you can jump down into the window with the rapid zorcher and get to the red door without having to activate the lift.

* The vertex count without the effect of node building is 436.