E1M4: Fire is the fourth and final map of Elements. It was designed by Neal Ziring. 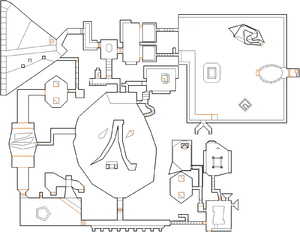 Map of Fire
Letters in italics refer to marked spots on the map. Sector numbers in boldface are secrets which count toward the end-of-level tally.

If the crushing ceilings near the start are stopped too low, it is possible to get stuck in Secret #1.

Just before the final room are two glass floors, both with several monsters on them, that can be lowered by switches. However, approaching either switch makes the other one inaccessible in single-player, so only one of the glass floors can be lowered, and thus 100% kills is not possible.

The switch in the main central room is supposed to lower two platforms with monsters. The western one does not lower in easy skill, thus making the imps on this platform (things 87 and 89) unable to be killed in easy skill.