E1M4: Hydroponic Facility is the fourth map of Double Impact. It was designed by Matt Cibulas (RottKing) and Ralph Vickers (Ralphis), and uses the music track " ". The par time defined in the DMAPINFO lump of the edition released as official add-on is 7:00. 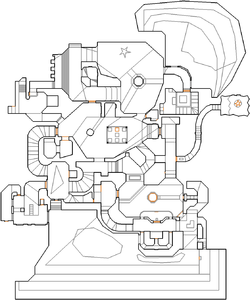 Map of Hydroponic Facility
Letters in italics refer to marked spots on the map. Sector numbers in boldface are secrets which count toward the end-of-level tally.

* The vertex count without the effect of node building is 1385.