E1M4: Jupiter Planetary Control Center is the fourth level of Massacre on Callisto, which is the first episode of The Lost Episodes of Doom. It was designed by Christen David Klie and previously released as a map in CHRIS_E1.WAD and later in CHRISK.WAD. According to the designer's notes in the book, it was released as CHRISK14.WAD at first.

This level is notable for being very difficult to gain 100% kills on at the end-of-level tally: In the room with the yellow keycard, the player must activate a switch to raise a small bridge to get a key. In the remaining pits on the left and right of said bridge are three deaf cyberdemons on each side, which the player does not have to kill to exit the level, but to gain 100% kills. If the player drops from the bridge the floor deals damage to them until they die, as there is no way out of the pits. All three keys are used. 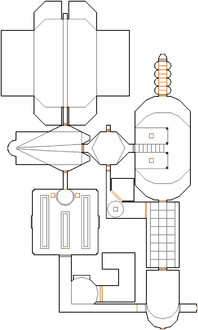 Map of Jupiter Planetary Control Center
Letters in italics refer to marked spots on the map. Sector, thing, and linedef numbers in boldface are secrets which count toward the end-of-level tally.

From start you have to turn around and open the door behind you. There is a switch, which opens the doors in the east and west of the start area. First head to the east, where you find a large area made of red stone, go to the end and use the switch. This will rise the bloodpools left and right from the bridge, and offer some stuff like the chainsaw, the rocket launcher and some ammunition.

There are two doors, one in the north, and one in the south. Go to the north door, where you will find the yellow keycard. This part is a bit tricky. After entering the room wait for the door closes behind you, then turn around and use the switch at the door. This will rise a small bridge, heading to the yellow keycard. Cross the bridge and get the key. Be careful, if you fall from the bridge, this will be the certain death for the player, because of the damaging floor and the three cyberdemons at both side of the bridge. After you got the key, leave the red stone area and head to the room eastern from the start area.

Go down the stairs and take the way to north. There is a row of platforms lowering, after the last of them you find the yellow door. Behind is the door lies the blue keycard, grab it and use the switch in front of you, to lower the platform behind you. Now go back to the starting area and take the blue door.

Don't let you get fooled by the exit sign there, this isn't the exit. Behind the door you will just find the red keycard. Grab it, and go back to the area where you got the blue keycard, go down the stairs, and take the way to south.

Open the door, take the steps up and you find the red door. Behind this is an area with toxic waste, and a switch on the opposite side of the area. Use this switch, to open two doors to the east and to the west. First go to the short hallway eastern, and use the switch inside, to open the last door before the exit area.

Then follow the way after the western door, after a corner this will lead you to a dark room with three areas, surrounded completely by walls. Jump over to the middle area, you can't reach the outer area from there. If you fall down into the dark area, go to the opposite, where you can find two teleporters. Both teleports you into the middle area. At the end is the switch to exit the level.

The door on the opposite to that, where you got the yellow keycard, will lead you to a balcony from which you can see the exit area. There lies a plasma rifle. Right behind this door is a switch, which is hard to be seen. You can activate it, if you stand directly under the door. This switch will rise the floor in the exit room, this way you can reach the areas right and left from the normal exit. Inside you will find some cells and the BFG9000.

In the room eastern from the starting area you find two little pits right and left from the stairs. The pit left from the stairs contains a supercharge, in the other pit you can find a blue armor. Drop into the pits to get these, at the bottom you find switches, which rises the floor, so you can leave the pits.

Killing the six cyberdemons in the area with the yellow keycard to gain 100% kills at the end-of-level tally is pretty hard, but not impossible. All six are deaf, so you have to enter the rising bridge before it reach its peak, to let the cyberdemons see you. After that, you can kill them, but be careful, the only place to hide is the small hallway at the entrance to this area, and you can open the door from this side only by crossing the line where the bridge begins.

* The vertex count without the effect of node building is 556.