E1M4: Mines of Mystery is the fourth map in episode The Ruins of Parthala of Heretic Upstart Mapping Project. It was designed by Walter Confalonieri (daimon) and uses the music track "Arpo" by Kevin Schilder. 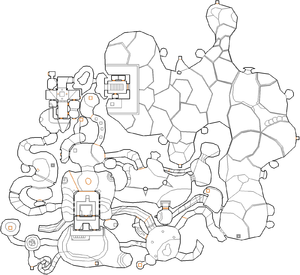 Map of Mines of Mystery
Letters in italics refer to marked spots on the map. Sector, thing, and linedef numbers in boldface are secrets which count toward the end-of-level tally.

Push past some gargoyles to enter the tunnel in front of you (some bars will close behind you), then follow the tunnel to a set of steps with Wand Crystals and follow them down to one or two golems next to a magma channel. Run across the channel and collect a Silver Shield on an island in the middle (it will fall into the magma as you walk on it), then turn left to see some steps lowering to reveal another tunnel that contains more gargoyles. Follow the tunnel round to a cavern with an Ethereal Crossbow among some barrels (collecting it will open two nearby closets containing golems), then continue following the tunnel north to find more golems and gargoyles guarding a door to a stone building.

Go through the door to see an undead warrior on a square platform surrounded by four ledges - you will start on the south ledge. Go through the first door on your right and turn right to see a switch that will raise four wooden poles around the platform, then head north past a golem to another door with another switch behind it - this second switch will open a pair of doors leading to the west ledge. Head round to the west side and open another door in front of you, go past three fire gargoyles to find a third switch that will lower the center platform, then step across to the platform and run north to find the entrance to a round cavern. Go round the cavern and head east then climb some stairs to a large door (guarded by an undead warrior on thou art a smite-meister skill level or higher) which has Wings of Wrath behind it.

After collecting the Wings, activate them then fly east and south over the magma pits until you pass a platform with another set of Wings on it, then land and head south towards three golems who are guarding a hole in a wall. Enter the hole and follow a tunnel past some gargoyles until you return to the starting room, where part of the floor will lower to reveal a water-filled passage in the west wall. Follow the passage to a cave with some fire gargoyles and head past them to a small cavern containing a Tome of Power surrounded by pods, then walk south to see a teleporter in front of you; ignore it and head up the curved staircase on your left, passing a nitrogolem and golem to reach a ledge with some more enemies protecting a switch. The switch will open two doors on the other side of the cavern for a few seconds - after pressing it, drop to the water below then head north up a staircase to get through the doors before they shut to confront two golems and an undead warrior ghosts. Head through another pair of doors and climb up to the platform next to you to find another switch, which will lower the pillar holding the yellow key.

Step through the north window to return to the area with the magma stream, then head east into a low passage until you reach a gray door between two yellow gizmos. Open the door and kill a disciple of D'Sparil waiting behind it, then turn left and head up some wooden steps to find some golems protecting a teleporter. Step into the teleporter then head south past three fire gargoyles to reach the blue exit switch.

As soon as you find the first Wings of Wrath, turn left and go round the corner to find a Morph Ovum behind some barrels.

In the south-west corner of the level is a Tome of Power surrounded by pods. Head west from this room to find a teleporter which leads to a magma pool containing a Bag of Holding.

* The vertex count without the effect of node building is 2451.