E1M4: Ruins of the Shadowkeep (Masters of Chaos)

E1M4: Ruins of the Shadowkeep is the fourth map in episode The Dark Tower of Masters of Chaos. It was designed by Caleb26 and uses the same music track as Heretic's E1M3: The Gatehouse.

This level includes a secret exit to E1M9: Bleeding. 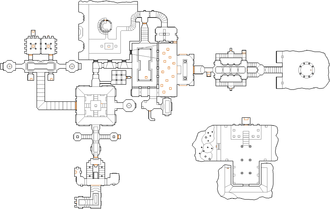 Map of Ruins of the Shadowkeep
Letters in italics refer to marked spots on the map. Sector, thing, and linedef numbers in boldface are secrets which count toward the end-of-level tally.

Follow the path past a door until you reach a switch, defeating two sabreclaws on the way. Press the switch to open the door you passed and head forward between the pillars to a set of steps, watching out for the disciples of D'Sparil and gargoyles ahead. Climb the steps and open the door at the top to find a teleporter which you should step into. (Before entering the teleporter, take the Ethereal Crossbow sitting by the bars west of the pillars if you need it.)

You will arrive in a square chamber with four staircases leading away from it. Take the Discs of Repulsion and head down the south passage towards a silver door which is guarded by nitrogolems. Go through the door and head down either passage ahead, watching out for golems in this area (the entrance door will be blocked by bars at this point). At the bottom of the stairs, climb the green steps ahead and follow the red floor to alcove containing the yellow key.

Head back to the green steps to find that three walls have lowered, revealing a number of golems and nitrogolems, some of which are ghosts. At the bottom of the steps, turn left and go past the wall which has lowered. The room behind it contains a teleporter which sends you back to the room with four staircases - take the north exit this time and follow the corridor to a large cage holding green chaos serpents as well as the green key. Turn left and head around the cage to its north side, then press the switch here to raise a staircase and climb it. Go through the door at the top, turn left at the junction and down the curved staircase to a large outdoor area. Climb the stairs of the wooden tower to the top, slay the two undead warriors here and press the switch.

Leave the tower, slay the monsters which have spawned outside, go back up the curved staircase and then go straight ahead at the junction. Climb the stairs here (the switch you pressed earlier lowered a wall blocking the way here) and destroy the sabreclaws at the top, then go through the door in the south-east corner which has yellow key markers nearby. The next area has several pickups which are placed under fast-moving crushing ceilings; run over the items to collect them safely. When you have the items you want, lower the lift to the east and ride it up to a yellow ledge.

Defeat the ophidians here and open the large east wall with a chained man. Head forward to a room with a red floor and press the switch at the far end behind some disciples, which will lower the walls on either side. Go up the staircases behind these walls and you will enter an outdoor area with a circular stone structure; jump into the structure and press the switch inside, then head back down the staircases to the red floor room where four doors have opened to reveal chaos serpents. Go through either of the south doors and follow the passage behind to a teleporter - step through it to be sent to the serpents' cage. Go straight forward and take the green key and Quiver of Ethereal Arrows, then step back into the teleporter to return to the previous area.

Go back to the red floor room and head through either of the north doors this time, behind which you will find a passage to another teleporter. Step through it to return to the room with four staircases, defeat the enemies that have appeared ahead then go straight forward and open the door in the west wall which has green key markers.

Head down the stairs past a number of golems. When you reach the bottom, turn left and head into a chamber with a lava fountain; press the switch in this fountain which will open a door in the south-east corner of the main room. Go to this door to find a teleporter behind it, which will send you to a small chamber to the north, containing undead warriors on medium or hard skill levels. Press the switch in the alcove ahead, which will lower a pair of bars in the neighboring chamber.

Step on the red square you just stepped off to return to the main room. Now turn right and head into a second chamber with a lava fountain, then press the switch in the fountain to open a door in the south-west corner of the main room this time. Go to that door to find another teleporter, which will take you to another chamber to the north. Head forward through the bars you lowered earlier and step into the teleporter behind them. You will arrive back in the starting area - go through the now-open gap in the wall ahead and press the switch just beyond it to finish the level and go on to E1M5: Forest of Silence.

Refer to secrets #5 and #3 below for information on reaching the secret exit to E1M9: Bleeding.

* The vertex count without the effect of node building is 2950.

This level contains the following numbers of things per skill level, not including items and monsters spawned by scripts: