E1M4: The Guard Tower is the fourth level in the City of the Damned episode of Heretic. 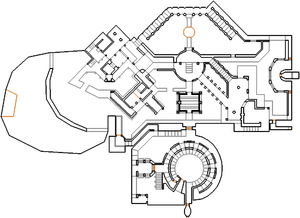 Map of The Guard Tower
Letters in italics refer to marked spots on the map. Sector, thing, and linedef numbers in boldface are secrets which count toward the end-of-level tally.

From the starting point, turn left and go outside, then turn right and follow the platform to collect the Gauntlets of the Necromancer. Turn around and go through the passage on your right, then west until you find yourself between the yellow door and a building containing barrels. Go into the building and pull the switch there, then go straight from the northern exit. Collect the Dragon Claw and clear the yellow key platform of monsters. Quickly run across the bridges to collect the yellow key, triggering a crushing ceiling. At this point, you may wish to explore the other buildings in the area to collect supplies. Notably, you will find an Ethereal Crossbow on the upper floor of the northwestern building. When you are ready, return to the yellow door and pass through. Immediately turn right and head straight up the stairs until you are blocked by a wooden wall. Drop down to the ground on your left and head south to a short, darkened passage. Go through and collect the green key in the barrel-strewn area beyond. Backtrack and go up the stairs, then make a U-turn to the right. Pass through the green door and climb the stairs to the exit. When you open the exit door, you will see, by the first time, a disciple of D'Sparil.

The following hidden area does not give credit as a secret: