E1M4: The Wharf is the fourth map in episode The Coast of Praevus of HUMP mini. It was designed by Mikolah and uses the music track "Marek" by Kevin Schilder. 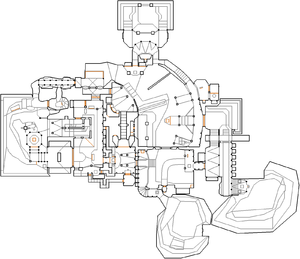 Map of The Wharf
Letters in italics refer to marked spots on the map. Sector, thing, and linedef numbers in boldface are secrets which count toward the end-of-level tally.

Head down the stairs to find some gargoyles next to a door and open it to find two golems in front of a fountain along with some Wand Crystals. Head north up some steps with Timebombs of the Ancients to dispose of more golems, then open the west door to face two undead warriors before heading south through another door to get back outside (there is a yellow key door on your right, remember it for later). Head south along the wooden walkway until you reach a fence then turn left to collect an Ethereal Crossbow; you will then drop back into the fountain area, where both exits will be sealed by bars and two walls will lower either side of the staircase revealing undead warriors. Enter the left-hand alcove and press the switch inside it to lower the bars, then go back through the east door; you can now enter the water pool in front of you before turning left to go through to the wharf area. Head as far north as you can then turn left to go up some wooden steps leading to a ledge with golems on it; go to the end of the ledge and run east to land on the dock below, then turn right to destroy some more golems blocking your way to the yellow key.

Taking the yellow key lowers various walls and stairs in the area, releasing nitrogolems and gargoyles into your immediate vicinity. Drop into the water and head north again as if you were going to climb the wooden steps again; a wall has lowered nearby releasing a number of sabreclaws. Go through the wall and ride the black lift here up, then destroy two nitrogolems on either side of a door that you can open to reveal a stone tunnel with golem ghosts as well as Timebombs and Lesser Runes. Follow the tunnel until you get outside then turn left to see a door ahead; open the door then step back to avoid two waiting sabreclaws before going forward to a switch, press it then head up some steps with more Timebombs to find a path leading back to the stone tunnel. Turn right and go through the small door you used earlier to find that a silver door on your right is now open; go through it to the hallway where you found the first undead warriors, then head through the door in front of you to return to the dock with the yellow key door.

Go through the yellow key door and kill two undead warriors that are revealed in front of you then turn left and go through a wooden door to enter a C-shaped room with gargoyles, undead warriors and nitrogolems. Head round to the other side of the room and climb some wooden steps to an overhead walkway, then follow it back the other way until you get back outside. Continue following the wooden path south until you turn right and see some undead warriors guarding a Tome of Power on a lower ledge; you will also face some fire gargoyles that are released when the gray door behind the warriors automatically opens. Go through the door and walk round the dark wall in front of you to dispose of two nitrogolems, then head up the steps to the green key.

Kill the undead warriors and ghosts that are released at the bottom of the stairs then head back to the dock where you found the yellow key; there are two gray steps either side of the dock that will let you climb up to it. Open the green key door here and destroy all the golems and nitrogolem ghosts behind it, then run south up a staircase (it has a gap in it) to clear out more golems along with fire gargoyles. Head south-east across the flowing river to find a Dragon Claw and three Energy Orbs in front of a switch and push it; this will reveal a Tome of Power and a Mystic Urn behind you, which you may need to deal with the disciples of D'Sparil that have been released outside (as well as undead warrior ghosts on bringest them oneth skill level or higher). Head through the now-open silver door in the west wall and prepare to kill more disciples that teleport in, then press the switch to the north to raise a bridge leading to the exit door. Open the door and kill one more waiting disciple, then press the blue switch here to finish the level.

There is a blue key door by the switch that raises the staircase to secret #6. After taking the blue key from secret #3, return to this door and open it to find a Mystic Urn, a Phoenix Rod and two Inferno Orbs. Watch out for the icy floor changing to lava when you approach the items.

In the fountain room, press the red banners on the south wall to lower a lift underneath you and enter a chamber with a Silver Shield. From here, open the decorated west wall to find a narrow tunnel and follow it past some golems until you enter an enclosed room with Timebombs, then open the east door and follow the path round to find Gauntlets of the Necromancer.

After taking the green key, head back through the wide gray door you passed through earlier and turn right; a smaller door has opened to reveal a Map Scroll.

* The vertex count without the effect of node building is 2901.