E1M4: Treatment Plant is the fourth map of Knee-Deep in the Dead in Doom the Way id Did. It was designed by Jason Root (Hellbent) in the style of John Romero. The par time defined in the DEHACKED lump is 1:30. 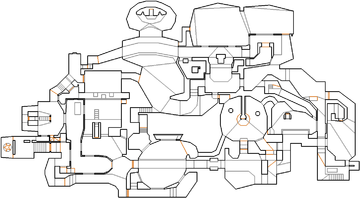 Map of Treatment Plant
Letters in italics refer to marked spots on the map. Sector, thing, and linedef numbers in boldface are secrets which count toward the end-of-level tally.

Open the door at the start. Go from this room to the next room. You will notice the wall lowering across the nukage to the north once you enter this room. The whole northern part of the map exhibits quite a lot of inter-connectivity and includes five secrets. Get them if you want, but to continue, follow the path eastward as much as you can to a lift up to the blue key. Now use it to get through the blue door nearby. Head across the river of nukage going westward. Follow the path until the next fork. To your right will be a lift, take it to find the red keycard. Go back and all the way west once you grab it, entering the red door. You have a number of choices at this point. The door immediately to your left contains several supplies. If you have the yellow key, you can take the other path on your left, and possibly find an alternative route to the exit, involving some secrets. Otherwise, take the path on your right, from this room into the next big room. There is a small alcove to the right with a switch, raising stairs and opening a door at the top of those stairs. Inside is another switch, hitting this one lowers the wall behind you. Behind this wall is the room closest to the starting point. However, go on the wall only and head west, through the next door and up the stairs into the next big room. This large room houses the exit door right in the middle. Behind this door is a set of stairs and a switch.