E1M4: UAC Waste and Storage Facility (M_SOLOUWSF.WAD) is the fourth map in episode The Remains of UAC of ZPack. It was designed by Hnsolo77 and uses the music track "Between Levels" from Doom II, composed by Robert Prince. The par time defined in MAPINFO is 11:00. 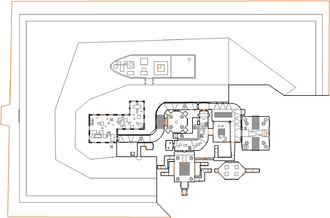 Map of UAC Waste and Storage Facility
Letters in italics refer to marked spots on the map. Sector, thing, and linedef numbers in boldface are secrets which count toward the end-of-level tally.

If you enter the water in the courtyard and head to the southern side, there's a sludgefall here. If you somehow make it into the sludge (most likely via cheating), you will see an image and be greeted by the message "Hnsolo77 is your God now! Face my Pet Demon!" This will cause a cyberdemon to spawn in the hallway just before the red key room.

To reach the secret exit, you need to enter the water in the courtyard near the ship's tail end. There is a tunnel just south of the tail end here, which will take you to the secret level.